I’ve been getting bombarded on all social platforms regarding this year’s touring commitments so thought it best to answer all the questions in one little blog now everything is in place for me personally and to stop the relentless questions, speculation and rumour.

Firstly, Steven Wilson. Unfortunately, I won’t be joining SW this time around on his Future Bites tour. Steven and I have spoken and on this album cycle, he’s looking for a different direction for the drums so is changing up the drum chair. I want to make it known, we haven’t fallen out in the slightest and we both want to work together again in the future and that will probably happen sometime down the line. I was only supposed to join SW for two months back in early 2015 and stayed around for four years and subsequently went around the world many times on two incredible tours. I have huge respect for Steven, he elevated my career, put me on the front cover of the world’s biggest drumming publications and gave me a huge break. I’ll always be grateful to SW and wish him, the band and crew a hugely successful tour and album cycle. Of course I’m a little sad after so many amazing memories, I’ll miss my band mates, but life goes on. You may even see me in the wings on one of the dates clapping out of time, getting my own back…

So, with this news, moving forward, I’m in a deeply privileged position where I had a few options and offers on the table for this year. As you know, I’m currently in the middle of Steve Hackett’s incredible ‘Genesis Revisited’ tour which finishes in New Zealand in June. After giving it some serious thought, I am delighted that I’ll be rejoining Mr. Hackett in September for the 2020/21 ‘Seconds Out’ world tour. Not only are all the band and crew (like my previous tour) absolutely wonderful, as are the fans, I get to play drums on one of my favourite albums once again. I’m very thankful to Steve and his management for asking me to stick around. It’s another welcome challenge and I will take the opportunity to push myself even further to achieve my playing goals

Hopefully that clears everything up….

I’d like to take this opportunity to say a heartfelt and huge, HUGE thank you to the SW fans who (mostly) made me feel so welcome back in the day when I was a fresh faced, scared, under-prepared drummer feeling completely out of my depth. As most of you know, it wasn’t an easy ride in the early days, and to play in a band with such a huge fan-base when you were pretty low on playing confidence with all the genius’ that had graced that drum chair was one of the scariest things ever. On the flip-side It gave me the biggest wake up call ever as a professional musician and forced me to improve and work on my playing daily, something I still do to this day. I’d like to think I won most of you over in the end 😉

Moving forward before the next tour, I’m now deep in preparation for an extremely important few days professionally for me 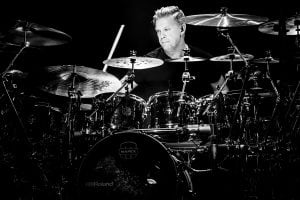 at Namm show in little over a week and then it’s a little outing with Lonely Robot in Europe before joining SH and the gang in Canada for another jolt around North America.

Wishing you all a happy new year and I look forward to seeing you on the road. Thank you from the bottom of my heart for all the support