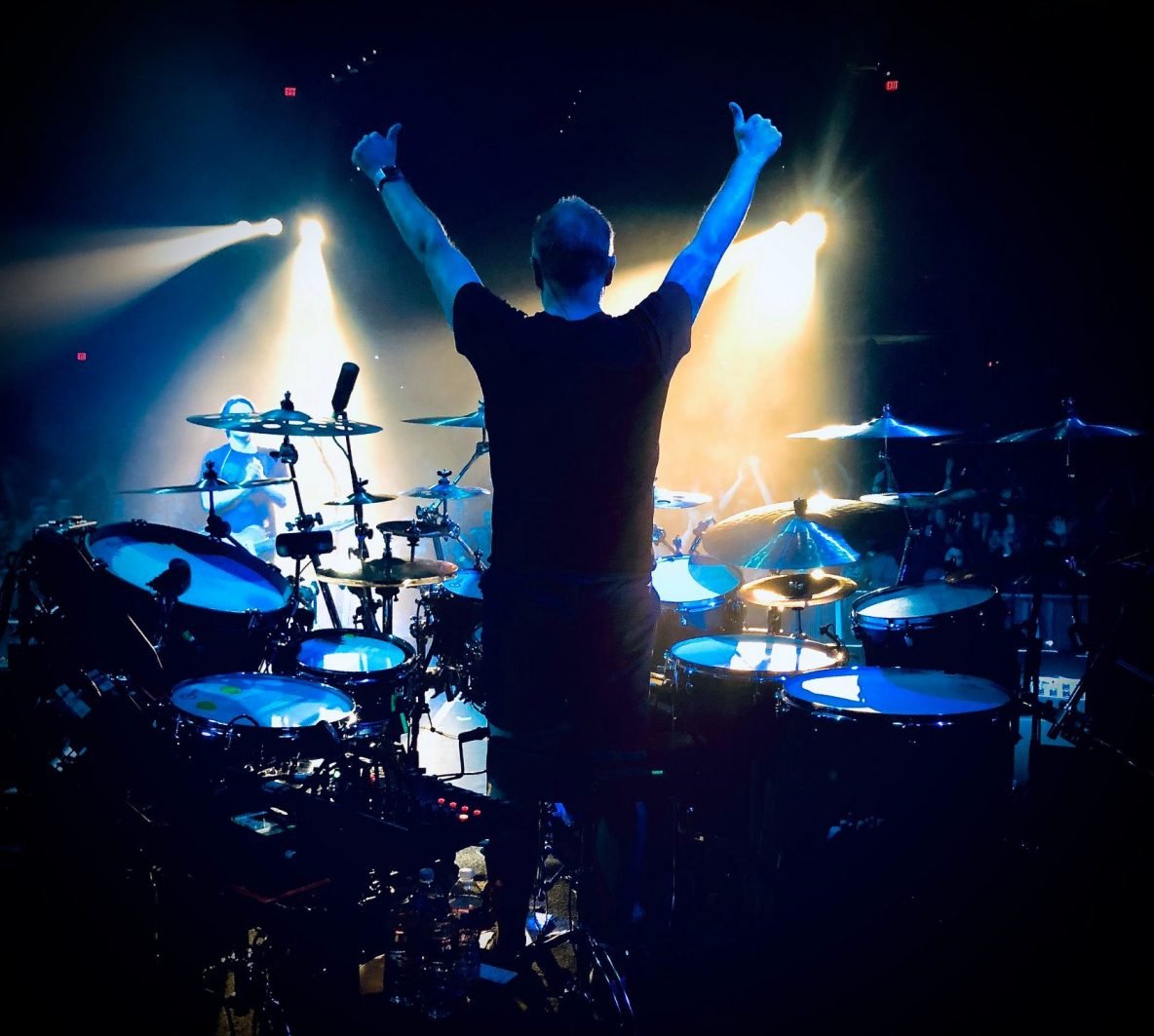 Well, what an insanely insane year it’s been once again.

I’ve been pretty quiet on the socials since tour due to a pretty intense workload that’s seen me working long days and nights programming, hitting stuff, writing, sound designing, recording and working on a few special ‘things’ that will see light of day soon, more of that next year.

It’s been a really full on year for me of which I’m eternally grateful. Steven Wilson completed his 145 date “to The Bone World Tour” and I went straight off tour on the 3rd of March in the Ukraine to Japan on the 4th to work for Roland in Hamamatsu so there was never really much break. After the Japan tour I flew to Canada to do a couple of shows with Official Frost*. These were my last shows with Frost and we parted company in the summer. Jem wants the freedom to gig and record when he wants, unfortunately it had to be largely around my routine so sadly it couldn’t work out moving forward. It was a very happy 10 years and still laugh when journalists review “Falling Satellites” and call me the new boy…Those boys are still hugely important to me and who knows later on down the line when I’m old and gray(er) we might have a knock about in a scout hut for old times sake! I wish them all the very best, they are top lads on and off the stage and still to this day it was some of the most fun I’ve ever had on a stage.

April saw the next long set of rehearsals with the next Steve, Steve Hackett. We had two very intense weeks of rehearsals followed by a six week European tour. In that time before tour, Mapex had made me a stunning Versatus drum set which I designed backstage last September and I’d learnt the SH/Genesis set backstage at all the SW shows, the head was a bit full but I had to make sure I was ready and not be “that” guy in rehearsals that everyone was waiting for. It doesn’t work like that with these bands and you’re expected to be on top form from the outset which can be tough sometimes.

The tour was a lot of fun, It took me a while to hit the ground running and be 100% but I feel comfortable now and feel like my playing has grown a lot this year, more than any other year I can remember. I’ve devoted a lot of time to maturing it the best I can without reading the forums or pressures of a fanbase and concentrated on being the best me I could behind the drums, It’s still a work in progress but one that I’m working on daily

It’s been so great to grace the covers of my favourite magazines and play to packed houses around the world, that was the dream when I was younger and still hasn’t changed, I only ever wanted to be a Drummers Drummer. It’s also been really nice to feature in most and win the polls and awards along the way this year . A few years ago, I took a step back from all that “please vote for me stuff’ these things are always insanely subjective and a popularity contest which I’m not interested in with the “who’s best”. I prefer to immerse myself in my art and if people like it its a huge bonus.

This year the annual Prog poll did shock me a little though as I was second and the only freelancer in and among the monster drummers in bands with huge fan-bases, I knew nothing about it until people started posting about it, the same goes for the other polls. It is very flattering as you are doing it off your own back so thank you for all the support on that side of things, I don’t read much into it but it’s nice to be liked for sure, I know the old man is up there somewhere proud as it gets but would probably still be on my case to “get a proper job”. I still have to pinch myself being surrounded by the heavyweights now but little by little the confidence grows and I’m insanely grateful.

I also managed to get a little bit of teaching in. For those that want some lessons in 2020, I’ll be announcing dates tomorrow for the next couple of weeks before travels start again, as always, details will be here.

At the end of the four month touring block it was the annual Freddie Gee drum academy down in Winchester which is always a highlight and a welcome break from touring. Next year I’m doing it with Steve White and Gregg Bissonette which will be a fabulous week once again. During a busy month I even managed to do the SW4 festival on Clapham Common with Congo Natty playing a load of Drum and Bass/Jungle to a packed Clapham common, THAT was a load of fun and its the least pressure I’d felt in a long time behind the kit, no-one knew who I was, there wasn’t a pressure to play a certain groove or iconic fill from those that had gone before and I could “be me” that alone was priceless and another reminder of why I love the instrument so much, this prog stuff can send you crazy if you are immersed in it 24/7, thankfully I play in other genres away from the spotlights

September up until now I spent most of it on tour again with Mr Hackett which saw us in North America and back in the UK. This year wasn’t the monster recording year like 2017 was but this year among it all I still managed to play on 14 albums. The couple of highlights in “prog” world” was the forthcoming albums by Fish and Lonely Robot. Every single one was brilliant and interesting but these two stood out for many reasons and I’m looking forward to hearing them when they are released

All in all its been an incredibly full on year once again and I’m extremely grateful for every cheer and award, nomination and front cover. I know I’ve missed loads out from The Art of Drumming TV Program on Sky arts to Paiste Cymbal Seminars in Estonia, but I tried to keep it as brief as possible!

I’d like to take a moment to say a HUGE thank you to the fans of the artists I’ve toured and recorded with this year around the world for making me so welcome, it really was the stuff of dreams once again. I know I will never appease everyone (especially in prog!!!) but I hope my playing has made you smile around the world. My bandmates, crew friends and three techs this year Karma, Ben and John for being absolutely incredible humans

Finally, my extended gratitude has to go out the companies that truly go the extra mile to support me all over the world and in my mind sums up what a true artist endorsement is all about, a healthy two-way working relationship between the artist and the company, both driving forward to strive for the next level together

Mapex Drums USA Martin, Bob, Duncan, Russ, Paul, Gerry and all at KHS
Paiste Cymbals Kelly, Eric, Christian, Reto, Luki, Martin, Meelis, Arno and all in Switzerland
Aquarian Drumheads Chris and Ron and all in Anaheim
Vater Drumsticks Chad, Stuart, Iwan and all in Boston
Roland Jules, John, Alita, Mike and all at Roland around the world
Protection Racket Dean Mandy and the team down in Cornwall (25 years and counting)
Sennheiser The incredible Simon Holley
Focusrite all at HQ
SlapKlatz Gunnar and all in Scandinavia
Cympad International
The RimRiser
zoom.corp

Wishing you all a wonderful and successful 2020 and from the bottom of my heart, thank you for all your support along the way